A little background:  There were those who thought Alain Passard was going mad when he announced several years back that he would turn L’Arpège’s focus to the vegetables he was raising at his biodynamic farm just outside Paris. Now, in 2015, it seems the epitome of fashion.

After nearly three decades of cooking at the highest level, Passard’s influence is more keenly felt than ever. An army of chefs who were touched by his vision are staking claims to the upper echelons of gastronomy, whether in the wilds of Sweden (Magnus Nilsson at Fäviken), the streets of Sydney (Mark Best at Marque), by the sea at Menton (Mauro Colagreco at Mirazur), or back home in Paris at the new-establishment (L’Astrance) or the just-plain-new (Tatiana Levha at Le Servan).

In Passard’s world grapefruit and almonds form the surprising but effective complement to the sweetest of peas. His brilliant reimagining of the tarte tatin doesn’t deconstruct the dish, but improves it, forming the apple slices into rosettes atop the pastry to maximise the surface area for caramelisation and texture. Rather than being an understudy, beetroot steals the limelight when it’s substituted for beef in a tartare replete with perfect, golden gaufrette potatoes, or in place of tuna in a take on nigiri, glistening with geranium oil. Passard is rightly considered a culinary genius but, more importantly, his food tastes sensational. 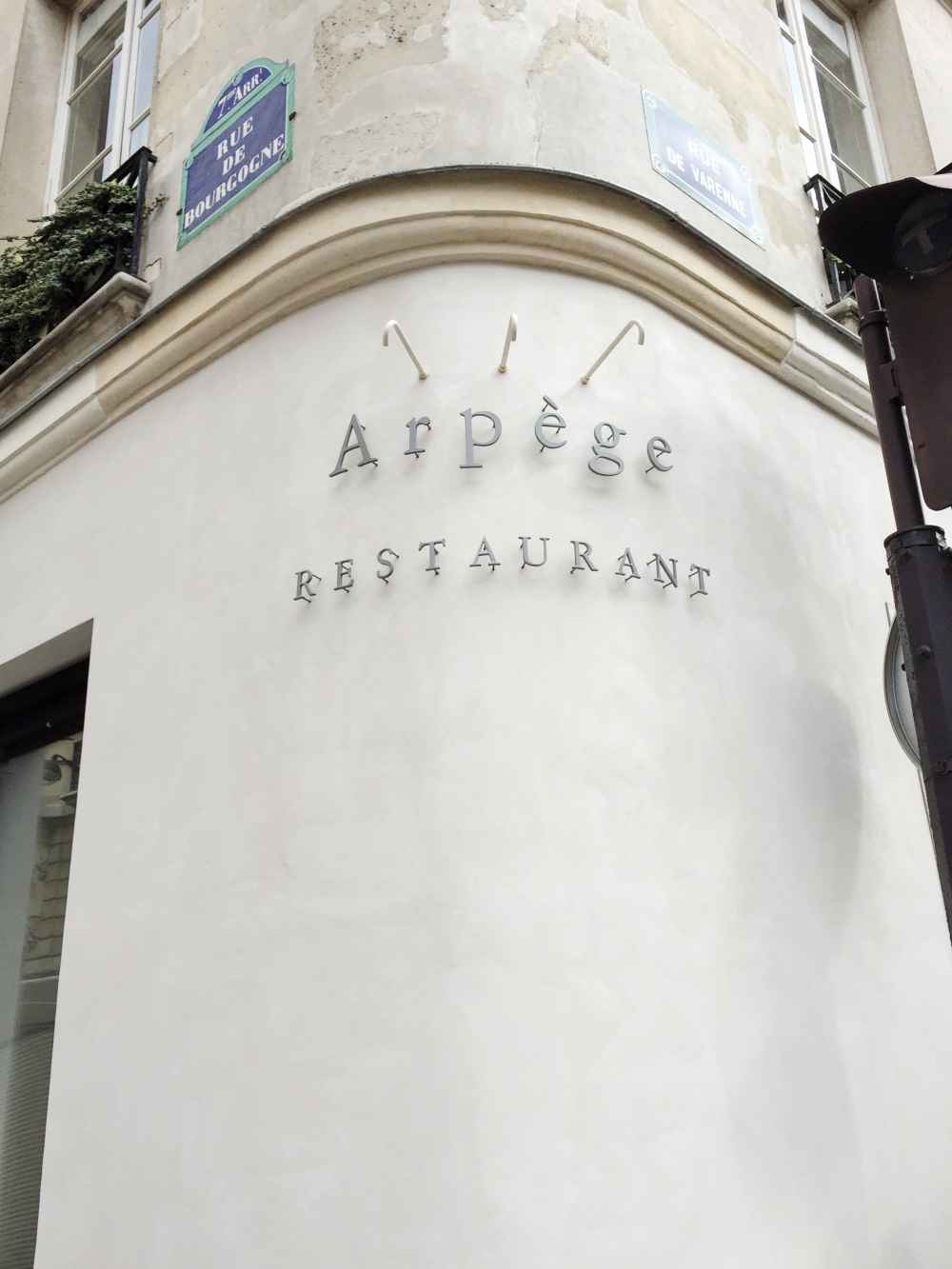 My visit:  There is no doubt that Alain Passard is amongst the greatest and most influential chef.  It’s the only three Michelin star restaurant that I know of where the menu is focused mainly on vegetables.  L’Arpege is currently ranked 12th in S. Pellegrino’s World’s Best Restaurants list.

For the above reasons, L’Arpege was added into my bucket list.  I made a reservation online 3 months in advance for lunch since they offered a lunch degustation menu that was half the price of the dinner menu. While lunch was still very pricey at 145 euro per person, the dinner desgustation was priced at 380 euro.

Our meal began with a puff pastry filled with apple, garlic and fennel.  The pastry was light and flaky with the perfect amount of filling.

Next came the trio of crispy tartlets with the following fillings: carrot and radish; beetroot and honey; and lastly celery and Parmesan.  These mini bites were an absolute delight and a fun way to showcase the contrast of flavors between each vegetable.

The artichoke velouté with hay cream was absolutely divine.  The smokiness from the hay cream paired well with the sweetness of the creamy soup.

The signature L’Arpege hot-cold egg was a true masterpiece and possibly the best egg dish I’ve ever had.  It was created by Passard in the early 1980s. At the bottom of the eggshell was a gently poached, warm egg yolk, which was covered by a light cool cream, balanced off with a drizzle of sherry vinegar and maple syrup.  Then finished off with a sprinkle of finely chopped chives. I loved the contrast of temperatures and the mix of sweet and savory flavors.  It was pure deliciousness.

Next up was the Mesclun salad with hazelnut praline, Parmesan and coriander oil.  How can something so simple taste so amazing?  The mixed greens were fresh and crispy and I loved the nuttiness of the light dressing.

We continued with the vegetable ravioli with a carrot consommé.  Each ravioli was made perfectly.  The pasta was delicate and paper thin.  The broth was light and flavorful.

The onion gratin was another stand out dish.  The subtle sweetness and silky onions melted in my mouth and it matched with the aroma and the crunch of the toasted hazelnuts.

The scallops were sweet but I would have preferred the geranium oil and lemon to be a little less acidic.

Following was a medley of carrots and radish in a sweet and sour sauce made with honey, olive oil, lime and pepper.  The vegetables were cooked to perfection and the sauce added brightness to each bite.

The emulsion of potato, black olive, fried Jerusalem artichoke was another highlight of the day.  It was textually pronounced and very well seasoned.

Afterwards we were served a dish of carrot and orange puree, spinach and candied lemon.. The puree had a smooth and light consistency and the carrot married perfectly with the orange. Both the puree and the spinach were great on their own, but when combined together with the candied lemon, the flavors were brought to a whole new level.

Next came the beetroot tartare with horseradish and potato chips.  The creamy quail egg offered a lusciousness to each bite while the salty potato crisps provided seasoning and additional texture.

The vegetable sausage was pure genius.  I loved the hint of spiciness in the merguez and the extremely flavorful couscous.  It was a superb dish with refined flavors.

The Paris-brest with pralines and cream was airy and crispy with the perfect balance of nutty flavor.

The millefeuille was outstanding!  Perfectly thin, crisp and buttery pastry interspersed with layers of sweet cream. It was decadent in all the right places.

Verdict: Our 4 hour long lunch at L’Arpege was simply spectacular.  The meal progressed at a good pace and the service was impeccable.  It was obvious that the staff took pride in the chef’s passion.  Throughout the meal, all 17 courses were perfectly seasoned and the balance on each dish was extraordinary.  The price tag is high, but I think it is inexpensive for what you are getting.  I believe L’arpege is worth tying at least once and the better news is that prices in France are reflective of tax and tip, so what you see on the menu is what you pay!